As I noted at the end of my last posting, I took a chance in asking Made to ask Nengah whether he might be willing to take me fishing in this morning and a plan was hatched.  To be clear, this is not a tourist activity -- this fishing is what many Amed locals do each morning to survive/work.  Nengah seemed slightly amused that I would be interested in watching him work but was agreeable.  Remember also that Nengah doesn't speak very much English -- so without Made to translate, we are left with much struggling to communicate -- including interpreting facial expressions and hand motions.

Anyway, Nengah asked me to be ready at my Bungalow parking lot at 4:30am -- and I was.  And to my surprise he showed up on a motorscooter to take me to a much farther away part of Amed where his boat rested on the shoreline among a line of probably 40 boats.  Another first for me as I can't remember ever riding on the back of anyone's motorcycle -- I reflected on trust and the uniqueness of the experience as we bounced down the road in the dark with no helmets.

We arrived at his boat where he crouched down and motioned for me to do the same with "wait."  I wasn't sure what we were waiting for but did wonder how the two of us were going to move this massive boat from the rocky shore into the water -- because the day before when we went snorkeling, all three of us (Made was with us) needed others help to get the boat pushed across the rock.  Today the boat was even farther on the rock and another boat was in front.

Well, in a few minutes I heard talking -- indeed commanding -- and many Balinese gathered at one boat at the time moving them until it was our turn and off we began.  Remember it is still completely dark as he motored a little way from shore and then put the sail up and soon we, along with lots of other boats were speeding into the dark seemingly guided only by the partial moon and massively beautiful stars.

Just before dawn, and as the boat sped (it was windy and we were moving fast), he began dropping net into the water and continued until all the net was in the water -- which seemed to be about the length of a football field.  The net had small floats on one side and stretched into the water for some 5 or 6 feet.  I could see a hundred other boats in every direction doing the same as morning dawned -- and we then just waited near the end of his netting for about 20 minutes.  During this time he stowed the sail and under motor power returned to the end of the net -- turning off the motor and using just his own strength to pull the net back into the boat as we moved back along the 100 yards.

For much of his pulling there was no fish and I began to worry if I would be perceived as bad luck if he didn't get anything that day.  However, when I asked him if he ever go no fish, he said "often."  Thankfully, by the time he was done pulling all the net, he seemed pleased with the 50 mackerel he had scored for the day.  I could tell from his reaction that his catch was better than nothing, but not the 100 he had gotten the day before. 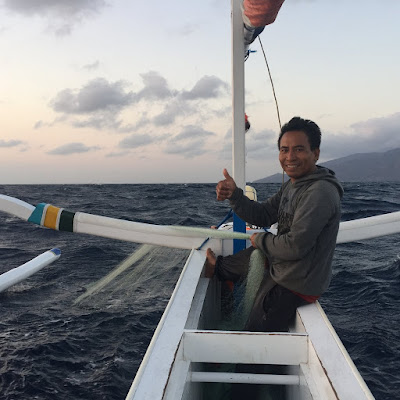 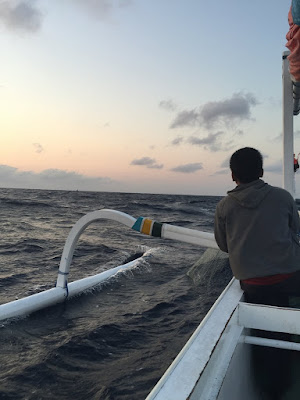 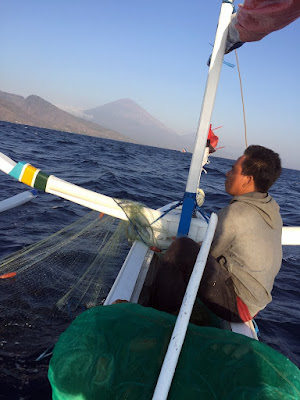 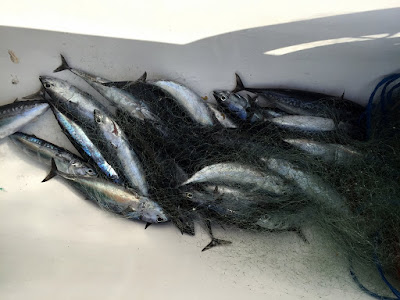 During this time I did get to witness another amazing sunrise -- but my enjoyment was a little tempered by my struggle to watch the horizon to keep from getting seasickness that I could feel coming on.  Thankfully, I kept the seasickness in check -- but it took some focus.

The work of getting all the net back in the boat seemed back breaking -- but soon we were back under sail headed for shore.  I'm guessing we were probably 3 to 5 miles out and it took a while.  The ride back was a great opportunity to reflect on how lucky I had been for this experience -- and it only got better.

I'll never have photos to show for it as I felt I was intruding into the culture of the fisherman -- but at shore I witnessed great brotherhood as other fisherman helped each other in putting the boat back onto the rocks, and repacking the nets as a local woman came and took 40 of the fish on a bucket on her head presumably to take to market -- no one except Nengah spoke any English even though many attempted and all were friendly.  Even Nengah's dad was there and was able to communicate to me that he had caught 38 fish by flashing his open palms 3 times plus eight fingers.

His dad took me by hand to a nearby table of snacks where I was given a cup of Balinese coffee (grounds still in the cup) and sat in wonderment as I watched all the fisherman gather around a cemented well and use buckets on rope to dip for water to shower.

Soon, Nengah had counted out a few of his remaining fish for his "helpers" and took a few for himself and I was back on the back of yet another motorbike headed back to my bungalow.  Nengah made it clear that he would be grilling these fish for lunch for Made and me.

I returned to my bungalow with such happiness of the culture I had gotten to witness this morning -- just because I took a chance in asking whether I could.

At lunch, Nengah and his wife fixed a wonderful and delicious presentation of the fish I had watched Nengah catch. 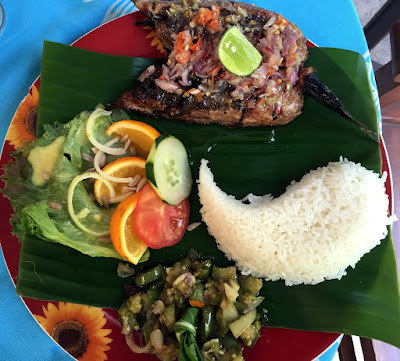 After lunch we bid farewell to my new friend and his wife -- and I got Nengah's contact information so I could share the photos with him -- and told him I would add a review to tripadvisor.com as it is widely recognized here as one of the many tickets to success as the warungs post the web site rating on their entrance, much like what is done in the USA.  You can see my review here. 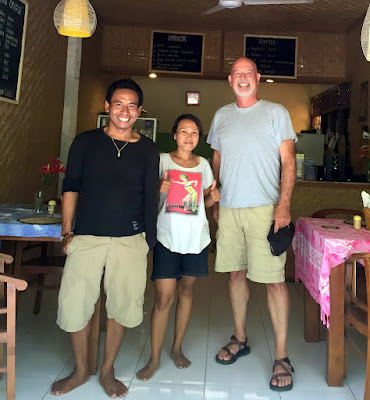